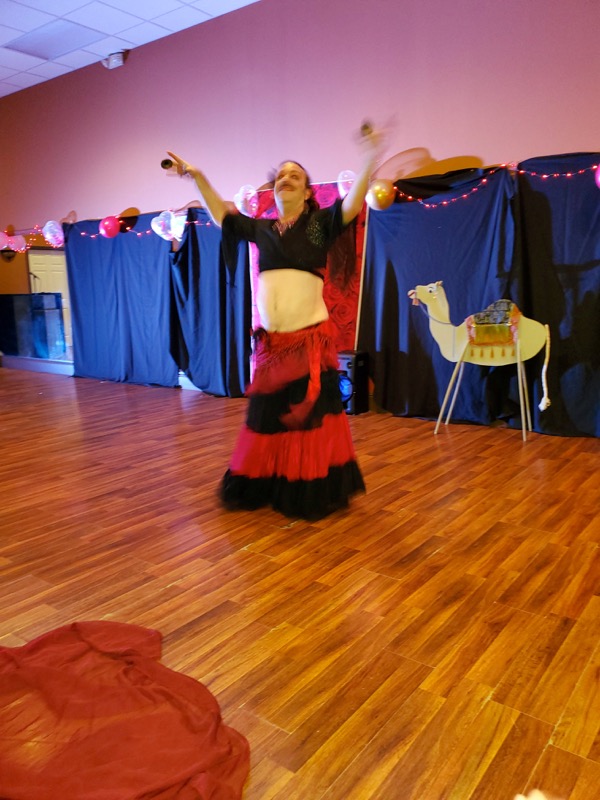 First live class since this CCP virus crap started. It was with Jenn Lane, who had a look of utter joy on her face! Good class too.

In other news, I have decided to dip my toe into the water of teaching! I've taught a(n apparently well regarded) veil workshop on and off for several years. But I seem to have found my stride in one-on-one coaching, particularly with veilwork, finger cymbals, and stagecraft. So I've just hung out my shingle for workshops and privates on these subjects. I don't feel qualified to teach basic Belly Dance though - I have too many problems. I'll see what happens, if anything...

I've added a new page as well as a new button in the main menu to promote this new endeavor.

A day like I haven't had in well over a year! LIVE Workshop and a show - with a twist. The workshop was with Vanessa as hosted by Nadirah Johara, but the show was hosted by Zaira!

The workshop was very fast paced in the Egyptian style. It was fun and VERY nice to have some normalcy again. The two hours just FLEW by! Vanessa is a great dancer and instructor, and is very kind and personable as well. We could have spent the afternoon yakking about dance and the dancers we both know!

The show was similar to last December's outdoor holiday hafla, held at "Field of Dreams". I performed good ol' "Solo-2 with veil prelude", wearing my red "Dragon's Blood" outfit made by The Mighty Siwa years back that saw me to this dance so many times at Kalisa's back in the day. I used the matching "Dragon's Blood" 4 yard veil (more on that in a minute!), and played my Zildjian Zills.

I don't know what was in the air, but almost every dancer at this event did veilwork or similar. Any number of single veils, one double veil, one set of Isis wings, two dancers with fan veils. What nobody was counting on was the 10 to 15 kt cross wind! When I arrived at the venue, there was a guy flying a parasail kite in the nearby field. There's your first clue, Sherlock: Maybe veilwork isn't the best idea? Never mind a four yard with finger cymbals! But we all did it, including the gal with the Isis wings who was wearing a long, trailing Flamenco skirt that she would manage with precision kicks to keep it out of the way (A skirt and technique I'd never seen before.). So here she is, huge Isis wings, dancing this in a skirt that would face plant me inside 30 seconds. In heels. *RESPECT* "Rafi", a dance brother, did double fan veils and got one of them wrapped around his head pretty well - his recovery was a model of how it should be done.

Although the veil dancing went better than it had any business going for everyone, two dancers had problems with the wind blowing "bags" in their harem pants. The two dancers in question both stepped into the "bag" - and one of those dancers was ME! I stumbled a bit - how bad will have to wait until I have the video - but the other dancer actually went down! However, she ended up looking better than I did, because she somehow managed to make it look like some kind of drop followed by a bit of floorwork! Zaira and I both thought it was part of her dance it was so well done! *RESPECT*

As for my segment, I think it went pretty well. This routine is now old enough to vote, and is so ingrained in me that I was still dancing it like a 2 year old dancer, not a 20 year old dancer! With considerable help from Jenn Lane, I was mostly successful in breaking the mold and improving the piece. I probably remembered half or even two-thirds of what Jenn was trying to get me to accomplish - we'll see when the video and pix come out. I was the ONLY dancer to play finger cymbals, not even Yvonne, who danced a cute routine with some of her girls in cool costumes, did so. I was complimented on them - "This is being lost!".

The virtual hafla went live today - and it was a wonderful show, with wonderful dancers and well put together. Unfortunately, it will be taken down in a couple of days, so linking to it here would be futile. However, I'm now able to release my own segment for general viewing:

Raks al Shemadan Video. I received a LOT of nice comments and compliments in the realtime chat during the premier! Shemadan, especially Shemadan with real candles gets people's attention! Then someone spotted my finger cymbals (Zildjians) before I started to play them and called out another compliment!

Jenn's video premiered along with mine - hopefully she posts it independently so I can link to it. She also received a LOT of nice comments/compliments and recognition of her work - as she should! UPDATE: and

The Shemadan was in rather bad shape, dirty, dusty, covered with old wax, sitting forlornly in a closet ever since the move from "Commiefornia" 4 years ago! Cleaned it up - first I froze it to help remove the worst of the wax, then I hit it with hot water to melt off anything remaining and clean it up. It now sparkles! Then I had to install new candles, the way I always have done it by casting them in-place with wax so they won't move or fall out. However, I only had 7 candles, and I needed 9! Fortunately, Ace Hardware of all places, carries the white "Household Emergency Candles" that I've always used, so other than a different looking package, they were the same!

Then I had to do a ton of practice - 10/11 years is a very long time ago, and my technique wasn't pretty! Thanx to Jenn Lane assisting me, I was able to get back into shape, and she helped me improve my dance over the old days. I had to practice in our garage, the only place that has enough headroom, albeit barely!

So today, I was able to video it for the virtual hafla, also with Jenn's able assistance! Goddess bless her! I can't yet release the video (watch this space), but Jenn took several stills which are in a brand new 2021 gallery along with several pix of the Shemadan cleanup.