So You Want to be a Veil Dancer, Huh? 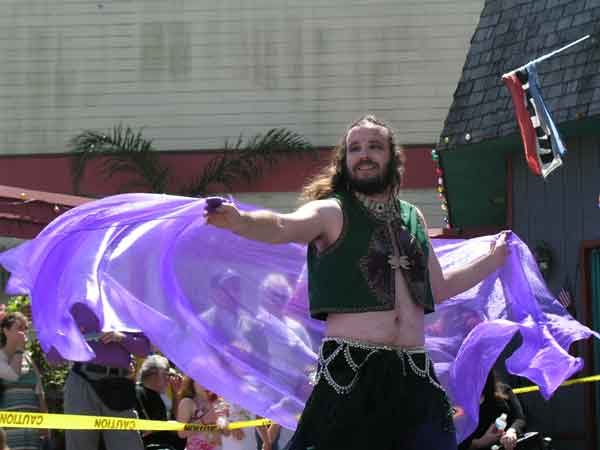 Dancing with a veil outdoors can be fun - but challenging!

"My veils laugh at me behind my back!"

"My veil is NOT my friend!"

I have heard these, and similar remarks from many of my dance sisters. I'm sure there are a few guys who feel this way also - among the guys who actually dare to dance with a veil; an activity I recommend for all Belly Dancers, regardless of gender!

These are not necessarily beginner's problems either - both of the above examples were stated by accomplished, experienced, and graceful dancers!

Because veil-phobia is a fairly common affliction among Belly Dancers, this brief article is intended to help the dancer overcome said fears and be the beautiful veil dancer s/he wants to be. I won't cover technique here, that's for your teacher. Nor will I cover what type of veil you should use - that's up to you (see Choosing a Belly Dance Veil). What I will do is explain what a veil is and some of the aesthetics. As veilwork is my passion, I get a bit philosophical at times, but try to balance that with some hard information too!

The teacher who first taught me veilwork was Jamaica. She has an absolutely hysterical & funny talk she calls her "How a Veil is Like a Man" speech. With due apologies to the guys, here it goes as I best remember:

There was more, but that's what I can remember. I also told her that a veil was like a woman because "it reserves the right to change its mind at the last minute!". All this is humorous, but contains a grain of truth. Wiggle Woman (Janette), Alyne, Shoshanna, Kamaal, Cory Zamora and others have taught me much of the mysteries of the veil - but it is always a learning experience to dance with one. No two veil dances are the same, no two VEILS are the same, and I'm still learning!

But on to the heart of the matter. What is a veil?

A veil is a creature of air. Without it, it is nothing. The veil dancer must always work with the veil, and with the air; never, ever against them. Working against the veil, or the air that it floats on, will result in very ugly veilwork at the very best - and a hopelessly tangled mess at the worst. Don't be an ugly veil dancer!

Guys - Please don't fight with your veil and beat it into submission! This isn't veil dancing, its a mess. And no-one, male or female, should thrash around at warp speed with their veil. This isn't veil dancing either. Work with the air and the veil and don't overpower it. If you can't control your power, get a different veil that can handle it, even if it means getting a heavy cape! Cape dancing is a bit different than veil, but a cape can handle a good deal more power so it will at least look good. It took me awhile to learn to control my power and let the delicate veil float on its element (air) - you can do it too! Its all about control!

Guys - see "The Bra Strap Conundrum" on my tips page for how to deal with veil wraps that involve bra straps!

A veil is, however, your partner. It dances with you. Your job as a dancer is to lead your veil, guiding it through its element of air.

The heart of veil-phobia is losing control of the veil and having an impossibly ugly tangle in the middle of your beautiful dance. How do we avoid losing control and the resulting veil disasters?

The first word is the dreaded "P-Word": Practice.

I won't tell you to practice what you want to happen - you already know that! I'll tell you to practice what you absolutely, positively do NOT want to have happen. Practice veil disasters over and over and over and over again. There isn't a successful veil dancer on the planet who hasn't spent more time with veils wrapped around their head, tangled up and twisted around arms, legs, feet. Caught in hair, stuck in sequins, pulling off bras (for the gals), you name it! We all share these fears and pitfalls. It isn't a question of if a veil disaster will happen, its a question of when.

Induce disasters (in your practice) on purpose - Goddess knows it isn't hard. Then what do you do once the disaster has been successfully induced? That most fearsome moment?

You deal with it.

Stay graceful, DO NOT PANIC! Do not yell OPA! at the top of your lungs and push the veil off of your head like I did the first time I had a veil disaster onstage!

There are, of course, many different ways to recover from a veil disaster - your teacher should be able to show you some. No two veil disasters are exactly alike. A (very) few of the possibilities of corrective action could be:

I've been asked what to do when doing veilwork outdoors. I've done a ton of veil dancing, but my experiences in outdoor veilwork are extremely limited. But the guidelines are still the same - work with the veil, work with the air (which is now almost certainly in motion), and be prepared to do deal with disasters as always.

Catching a veil disaster early is your best defense, before the veil gets good and hooked, good and wrapped, good and tangled. That's where the practice pays off - you become one with the veil and develop an instinct as to what its up to. Veil dancing is indeed all about control, but remember that control is an illusion - the only part of a veil you truly control are the one or two points of contact where you hold it. The rest is going to do what its going to do!

I've encountered most of the above situations at once time or another (no, not the bra strap one!

), and have employed similar solutions! Don't be afraid of your veil or the inevitable veil disasters - these are part of veil dancing and practicing how to "deal with it" will enable you to go onstage with your veil and be confident that you can handle anything it can throw at you! All the "big name" veil dancers have plenty of veil disasters, and usually only a trained eye will see them as they have practiced and know how to recover gracefully. And so can you!

May your veils bring you joy as mine do!